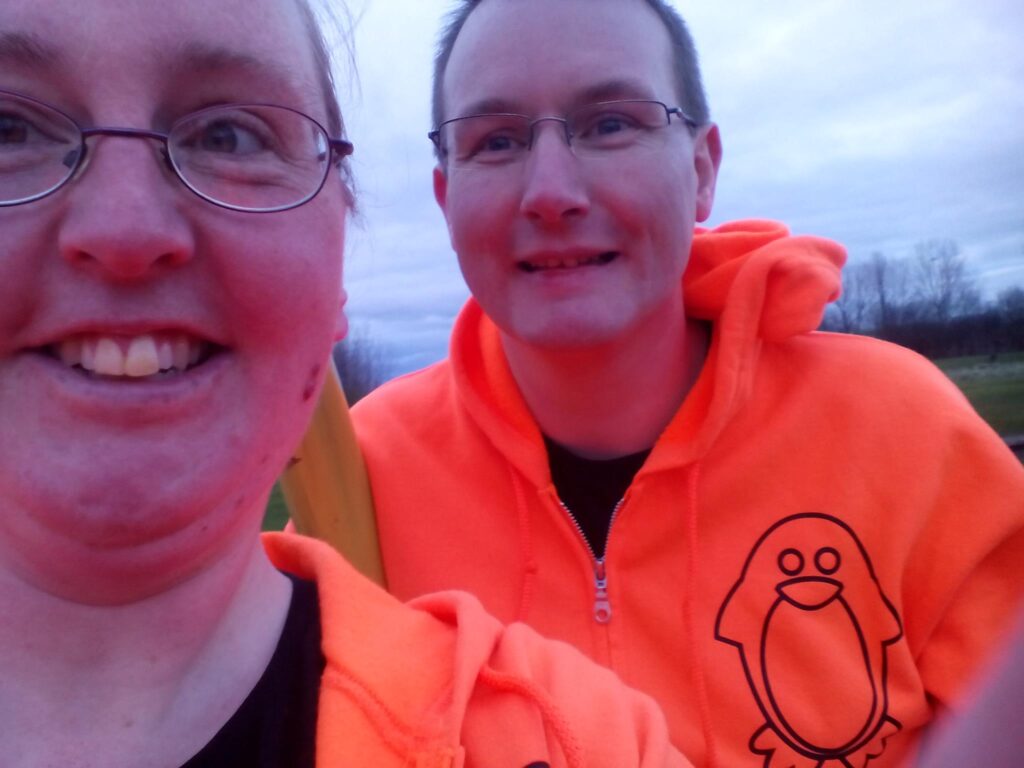 Michelle and I live about 45 miles apart and I went up to see her. I put that I would be starting “training” on Monday and so when I arrived, I was told I was going out for a run… I didn’t seem to have a choice to put this off any longer and so got changed (I always have various clothes in the car) and got ready to attempt a run, something I’ve never managed before. The best I’ve done is walking for a while and no running ever happened. I have on a number of occasions attempted running on a treadmill and always lose balance and co-ordination and instead seem to fall off and entertain people in ways I didn’t intend.

Here we are getting ready to run, all changed and headed out the door. Michelle brought her son to help motivate or humiliate or annoy us – not sure which or maybe it was to give her husband some peace so he could sleep – I’m thinking it was one of the former ones anyhow he came out with us.

We walked to the park and that was our warm up time and then it was one minute jogging, then 90 seconds walking. I thought it can’t be that hard, I used to run about lots when I was a kid so lets get started and the first 5 minutes wasn’t too bad and then it was. I think I managed to get just to the half way point of the programme (which is only 30 minutes total) and felt like collapsing then sat and waited for breath back and the weird burning feel in my throat to go but I was done – it took about 20 minutes for the feelings to disappear and this morning the top of my legs just were sore. Michelle continued and did I think the whole thing while I entertained her son by going on the swings in the park we were at.

So from first stance, I am exhausted but need to get on – this was day one and I’m not sure I’ll be done within 6 weeks but it was an eye opener. I think these programmes assume a little fitness – they say its only 20 minutes or so… it felt a LOT longer than 20 minutes but we will get there. For the next few weeks, I’ll be doing them alone or dragging someone else to try it too.